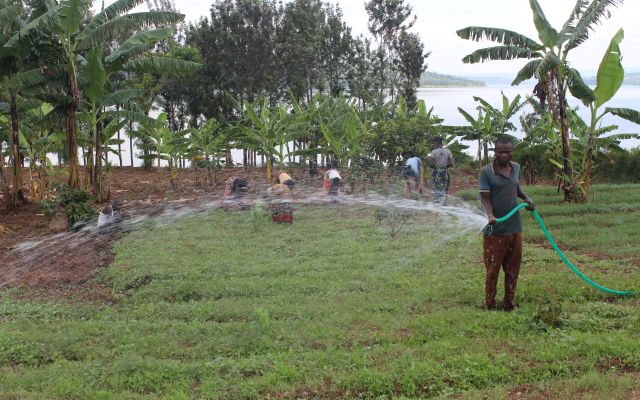 The inhabitants of Bugesera district in Eastern Province experience more cyclical and persistent droughts in recent years. Crop failure during droughts means that the entire region depends on external food supplies. The IKI Small Grants project aims to strengthen the resilience to climate change for 2.000 households in vulnerable communities in the Bugesera district. It introduces climate-smart and solar-powered irrigation systems, as well as energy-efficient cooking stoves. These installations are accompanied by intensive trainings for the target group. Among other things, awareness campaigns are conducted through radio broadcasts and farmers are trained to maintain and repair their irrigation systems. The producers of the cooking stoves are also involved in product improvement processes.

The climate of Bugesera District in Eastern Province, Rwanda is dry and increasingly suffering from severe droughts. Since agriculture is the main economic activity that provides nearly 79% of employment to the district’s population, the entire region depends increasingly on external food supplies. The length and intensity of land degradation further weakens the land’s resilience. Wood fuel remains the leading source of energy for cooking which also contributes to greenhouse gas emissions and thus climate change. Continued over-dependence on unsustainable wood fuel as the sources of energy has contributed to uncontrolled logging of trees.

Selected beneficiaries participate in trainings on climate smart agriculture and act as multipliers to reach all targeted households. The participatory planning process of the project allows feedback loops from the beneficiaries and plans for several community engagement meetings during the project implementation.

The first component establishes solar powered irrigation systems to be self-managed in a decentralized and participatory manner to 300 farmer households. These systems reduce greenhouse gas emissions for water pumping and grant access to water during dry season. The system can irrigate up to 5 hectares of land, owned by the participating farmers. The agriculture land is located near a water source and water is stored in a dam sheet which can also collect rainwater. The irrigation system does not use much water and thus has low impact on ground water usage.

Secondly, 2,000 households are equipped with energy efficient cooking stoves, which will lower the amount of firewood used in the area and further reduce greenhouse gas emissions. The project uses locally made cookstoves which fit local cooking habits. The current adoption rate for similar cooking stoves proves to be very high.

Over the entire period of the project, an estimated 2,300 households will benefit from it.

IKI Small Grants supports APEFA in their organisational capacity development over a period of two years. Measures include an intensive training on newest trends in Monitoring and Evaluation, focusing on the impact level as well as fundraising trainings.

Its vision is the effective integration of the Rwandan population in the process of solving challenges related to the environment and food security.