Nature based solutions for urban resilience in Colombia 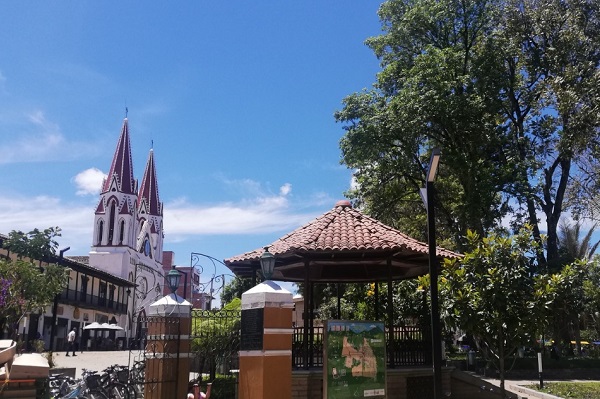 The municipalities, Soacha and La Ceja, are experiencing an accelerated urban growth due to their proximity to two metropolises, Bogotá and Medellín. Moreover, the average temperature and precipitation are expected to increase in the coming years. Both municipalities are therefore facing serious challenges related to air quality, flooding or degradation of ecosystems. The IKI Small Grants project aims to strengthen climate resilience in Colombian cities by integrating Nature-Based Solutions (NBS) in urban planning. NBS are understood as a multifunctional strategy for Colombian cities to meet the challenges of climate change, biodiversity loss and urban habitat. The project aims to support the mayor’s office and the community of both cities in urban planning through an integration of NBS. It adjusts and applies a scientific conceptual framework and supports the design and the implementation of at least one NBS in each municipality in collaboration with the local mayors.

The Global Climate Risk Index ranking indicates that Colombia is among the 20 countries most at risk of extreme weather events. Furthermore, the Colombian Environmental Index on Urban Quality reveals weak conditions in all the cities of the country reflected in problems such as increasing floods, air pollution and biodiversity loss. The project is implemented in the two municipalities Soacha and La Ceja. Soacha is located near Bogotá. It experiences a rapid urbanization and therefore serious problems related to air quality, degradation of wetlands and ecosystems. Soacha is part of the buffer zone of the Sumapaz National Natural Park, which is strategic for the water supply of Bogotá and Cundinamarca. With a deficit of green public spaces and a high risk associated with flooding, Soacha faces strong challenges in climate change scenarios with increasing temperatures and precipitation.
La Ceja is located in the fastest growing urban area of the Antioquia region and has two important protected areas that provide ecosystem services to the eastern Antioquia sub-region: Cerros de San Nicolás and El Capiro. La Ceja is increasingly changing rural soils for urban needs while facing problems related to settlements in flood zones. It has a low index of green public space and has to deal with increasing pollution of water bodies.

The project targets the municipal administrations of La Ceja and Soacha, as well as the inhabitants of these municipalities who benefit from decisions taken regarding the inclusion of NBS. By serving as pilot municipalities, other mayors’ offices of neighbouring municipalities also benefit from building capacity in implementing the NBS Guide in their urban development. The municipalities participate mainly in trainings and capacity building workshops and in the implementation of targeted NBS. During the design stage of the prioritized NBS, interaction is taking place with other beneficiaries and stakeholders such as citizens, local organizations, trade unions, environmental committees and environmental authorities through co-creation and co-design workshops.

The project supports the mayor’s offices and the communities of both cities, Soacha and La Ceja, in urban planning through a clearer integration of NBS. It adjusts and applies the conceptual framework proposed in the “Guide for integrating nature-based solutions in urban planning, a first approach for Colombia” published by Alexander von Humboldt Foundation and Ecologic Institute in 2020. In addition, it supports the design and the implementation of two selected NBS in each municipality in collaboration with the local mayors. To achieve this, the project implements a multi-step strategy to inform and train urban planners. It aims at generating capacities in topics such as creating the maps to identify NBS opportunities and needs, approaching future planning of NBS, multifunctional design, co-production of NBS, financing NBS as well as monitoring NBS. In cooperation with the stakeholders, the project sets clear timelines and milestones for the implementation of the NBS prioritized. The implementation can include financing design, materials or small constructions to enhance natural features and their benefits. The project further facilitates networking and knowledge sharing events to enable the application and upscaling of project results in other cities. Simultaneously, the project collects relevant data to enable a scientific evaluation of the processes and effects and to adapt the scientific guidance for NBS according to the local experiences.

HTM is a non-profit organisation that seeks to contribute to sustainable territorial development through the study, planning and management of socioecological systems dynamics in local and regional scale in Colombia. HTM provides technical support to local municipalities through studies and capacity building. HTM works in territorial and landscape management, promotes strategic management for the conservation of natural systems, develops territorial training and environmental education.