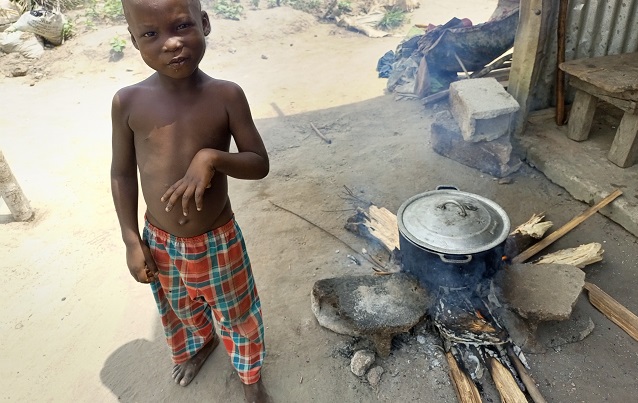 In the West African nation of Liberia, nearly 90% of Liberian households do not have access to electricity and rely on traditional biomass (fuelwood and charcoal) for cooking. Particularly in rural areas, the widespread cooking practice with solid fuels with severe implications for human health, forest degradation, and climate change. However, the local charcoal production method mainly uses indiscriminate logging and an inefficient, traditional system leading to emissions of methane and other Green House Gases into the atmosphere, thus contributing to climate change.

The project aims to directly benefit 1,000 rural households and two charcoal associations in Bong County. The households are located in three townships or locations which are densely populated with most households depending on charcoal production. Criteria for selection include on the one side a household headed by a woman or child and relying on open fires or traditional stoves that produce a lot of smoke. And on the other side, households involved in charcoal production and marketing charcoal for livelihoods.

According to the World Health Organization, using wood fuel for cooking (open fires or simple stoves) exposes households to hazardous indoor air pollution, which is responsible for millions of premature deaths annually and contributes to several illnesses. The targeted families will benefit by reducing the death rate per year from indoor air pollution and its related health problems caused by open woodfires. It will also reduce emissions of CO2 and deforestation in central Liberia caused by traditional charcoal production and open woodfire cooking. Also, it will train local fuel-efficient stove producers’ technical, business, and marketing skills.

Concrete activties of the project include among others the training of up to ten local artisans on fuel-efficient cookstoves constructions capable of reducing fuel consumption by more than half. The project will also encourage charcoal producers to diversify their livelihoods to grow crops along the tree plantations destined for charcoal production.

Additionally, the project encourages beneficiaries to be selective in their harvesting practices and plume dry branches instead of cutting the entire big trees. At the same time, the project will train women and youth groups in manufacturing charcoal briquettes. In addition to improving the efficiency of charcoal production, the briquettes are made from agricultural waste. Making briquettes and marketing them will significantly increase women’s and youth’s incomes and reduces their dependence on natural forests for charcoal production.

In another step, the project will collaborate with beneficiaries’ communities and establish three tree nurseries containing 6,000 seedlings across the beneficiaries’ communities. The tree nurseries will be created on the community’s land. Meanwhile, seedlings will be distributed to households to create individual delegated charcoal plantations at their household levels.

Towards the later stage of the project, the organisation partners with community leaders and charcoal associations, to identify 100 households with access to land and to distribute 6,000 tree seedlings to 100 households to establish delegated charcoal plantations to ensure a sustainable biomass source to produce charcoal. Meanwhile there will be trainings with 100 local stakeholders about climate change and maintaining and utilizing the delegated plantation for fuelwood and charcoal production to avoid deforestation and climate change.

In an overarching goal, the project approach includes the spread of information to local, national, and international stakeholders about the project, the importance of clean cookstoves, improved forest management, sustainable charcoal production, and the need to lower GHG emissions to mitigate climate change.

Volunteers for Sustainable Development in Africa (VOSIEDA) is a network of development professionals and volunteers working to promote prosperity, reduce extreme poverty, and strengthen peace and stability in Liberia and West Africa’s Mano River Union Basin region. The organisation envisages healthy and prosperous societies where there is no extreme poverty, where communities are committed to caring for nature, and where justice, dignity, and respect prevail for all.

Volunteers for Sustainable Development in Africa (VOSIEDA) is active in Liberia and works with partners in West Africa’s Mano River Union Basin region, specifically in Guinea, Sierra Leone, and Ivory Coast. The organisation partners in their work with indigenous communities, governments, and municipalities to protect the planet and eradicate all forms of poverty, wherever they exist.