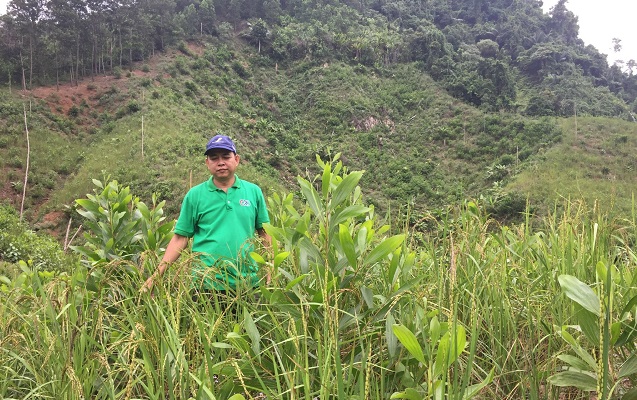 A Luoi is one of two mountainous areas of Thừa Thiên-Huế province in Central Vietnam. Given the forest degradation, the barren hills, and steep slopes, the area is vulnerable to climate change with negative effects on the livelihoods of ethnic minorities. To minimize the negative impacts of climate change, the IKI Small Grants project aims to enhance adaptive capacity for ethnic minority communities. To do so, the project rises local people’s awareness of climate change impacts and climate-smart agriculture. It further supports market accessibility of the products deriving from the improved climate-smart agriculture.

A Luoi district  covers around 1000 km² with 50.000 inhabitants of which 56% belong to ethnic minorities. Many challenges converge that require sustainable options for the declining areas of natural forest and biodiversity. In addition, a new forest policy restricts non-timber forest products’ access to forests. Most households have limited agricultural land. Only 15% of the land is cultivated, mainly with monocultures of staple crops. The district is considered a natural hazard hotspot, with extreme rainfall between June and August. The steep terrain is prone to landslides and flash floods and is not suitable for agriculture. Seasonal changes include more intense rains and droughts. In 2020, around 20.000 animals and 8500 hectares of agricultural land were lost within one season due to sudden temperature changes.

The project targets the two poorest communes A Roang and Lam Dot in A Luoidistrict, which have poverty rates of around 60%. Many inhabitants belong to ethnic minorities who previously depended on forests and non-timber forest products for their livelihoods. The project targets 300 poor households in the two communes. In addition, the project also benefits women who are directly involved in agricultural production, e.g. in the cultivation of crops and in small animal husbandry.

The project aims to enhance the adaptive capacity for ethnic minority communities by developing climate-smart agriculture models in A Luoi district, Thua Thien Hue province. To do so, it conducts a baseline survey to identify the needs and current resilience capacities of the target community, focusing on ethnic minorities. This is followed by 2 “Train the Trainer” workshops, that explain climate change and climate-smart agriculture to 20-25 practitioners, who later work as multiplicators for another 200 households.

There are four climate-smart agriculture models piloted on eight selected households, which are upscaled to up to 60 households. Farmer Field schools are used to disseminate technical knowledge on developing climate friendly agricultural practices. Moreover, 4 saving-credit groups, each with around 15 members, are established at 2 target communes to increase the credit accessibility for households to invest in climate-smart agriculture.

To improve market access for 60 households, 4 climate-smart agriculture production groups are established to support each other in marketing strategies and market access. Members of these groups participate in six different trainings on business planning, value chain development, and market access. Moreover, the groups participate in at least three marketing events to present their climate friendly agricultural products to customers. By the end of the project, there are at least two signed contracts between groups and market actors to consume the products.

The Centre for Rural Development in Central Vietnam (CRD) was founded in 1995. It is responsible for conducting research, training, technology transfer, and policy advocacy to enhance the capacity of the community, social organisations, and local officials on, environmental and ecological protection, social equity, and promotion of democracy. Since its establishment, the centre has built a network with more than 40 international organisations and donors to implement about 195 projects across provinces in Central Viet Nam. CRD focuses on three fields of activities: Sustainable agricultural development towards a value chain approach, disaster risk management climate change adaptation and mitigation, and natural resource governance and biodiversity conservation. The cross-cutting issues throughout the CRD’s projects are good governance, gender equality, child protection, and traditional culture.